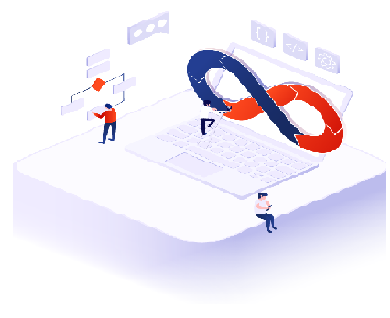 DevOps is an approach to software development. You might hear about it and even look for DevOps service providers. Why is it so popular, how does it work and what benefits does it provide? Keep reading if you want to know the answers.

There is a Waterfall model – approach to software development that was very popular before DevOps methodology came around. It is pretty simple to understand and implement and it hadn’t analogs for a long time. The Waterfall lifecycle looks like a real waterfall. One task flows over another and they are accomplished one by one. The idea is ok. But in reality, it looks a bit different. There are three main roles in a software development team: a developer, a Quality Assurance (QA) engineer and IT Operations.

The developer writes code, QA engineer makes tests, IT Operations manages and deploys the infrastructure. It still looks ok, but you can’t just accomplish processes one by one. Developer and QA operations need to have a testing environment deployed for running tests before code deployment to production. Thus, they need to bother IT Operations quite often. Also, there is also a mess between a developer and QA engineer because they need to throw code to each other for testing, bug fixing and rewriting. Waterfall in real life becomes a very unwieldy and inconvenient model.

DevOps is a practical implementation of Agile methodology. It provides the work with the team and automation of routine processes. DevOps has some principles that allow understanding this approach better.

DevOps provides Infrastructure as Code or IaC. This principle allows creating and customizing testing environments in advance. DevOps engineer makes the deployment environment and stores its settings within a special textual file – manifest. Manifest is written in descriptive language, so every developer can use it, regardless of the programming language he/she knows. When a developer needs to make preliminary tests, he/she can create own version of an environment and run tests without asking an IT Operations or DevOps engineer. The same is related to the QA engineer.

The next important principle is Continuous processes. DevOps methodology provides Continuous Integration, Deployment and Monitoring. Continuous Integration and Deployment are also called CI/CD or CI/CD pipeline. This principle states that the developer should write code in small chunks because it is easier for testing and deployment. The main idea is to automate part of tests and make integration faster. As a result, you have fast releases, be it updates or bug fixes. In any case, it is quite faster than Waterfall.

Continuous Monitoring means automated infrastructure monitoring and logging. DevOps engineer makes self-healing infrastructure. If something goes wrong, the system can just restart and continue to work. So, DevOps engineer or IT Operations shouldn’t monitor the system manually and work in night shifts. He/she can just come to work in the morning,  see what happened and solve it if needed.

You can surely notice how efficient the DevOps approach is. With this methodology, you’ll have an increase in competitiveness because of fast releases. You also will have a more satisfied team because their work becomes more efficient and easier. Also, you’ll have more profit because of faster releases that will take less time than in the Waterfall model. But at first, you should invest in the DevOps transformation, of course.

Wrap up: DevOps is a great decision for the business

We described a DevOps approach, its main principles and benefits. Wrapping up, we can say that DevOps is the most modern and efficient methodology in software development. It exists for more than 10 years but it is always developing and keeps becoming more popular.

If you’re looking for how to make your processes better and faster – DevOps is an answer.